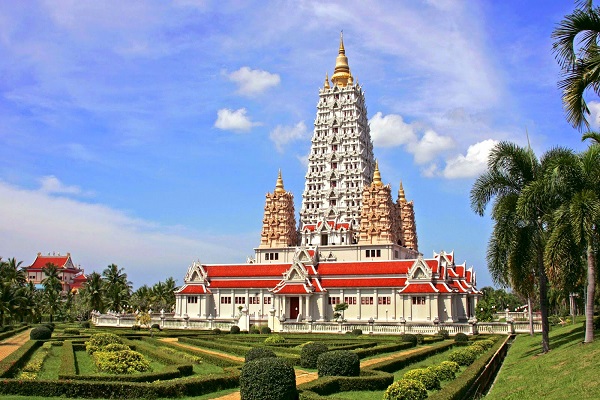 Wat Yansangwararam (known locally as Wat Yan) is about a 30 minute drive from central Pattaya.
Wat Yanasangvararam, a Buddhist monastery under the royal patronage of His Majesty King Bhumibol Adulyadej, is situated in Huay Yai Sub-district, Bang Lamung District, Chonburi Province. Somdet Phra Nyanasamvara, the 19th Supreme Patriarch of the Thai Sangha, initiated and oversaw the construction of this monastery which subsequently received the name of ‘Yanasangvararam’ after the ecclesiastical title of the Supreme Patriarch.Wat Yanasangvararam is situated in an area of 58.64 hectares.
Wat Yansangwararam contains many priceless Buddhist relics, said to belong to Buddha and his disciples, and a replica of Buddha’s footprint.
Wat Yansangwararam is one of the few free to enter tourist attractions in Pattaya, and there is ample parking, it is open from 8AM to 5PM, food and drink is available on site.